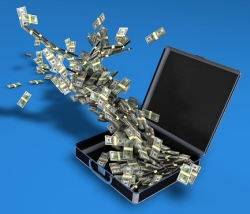 Wealthy Democratic and Republican donors are lining up behind the three candidates in this spring’s “nonpartisan” Wisconsin Supreme Court race.

Campaign finance reports recently filed by the three candidates that cover fundraising and spending for the last six months of 2015 show incumbent Justice Rebecca Bradley has the backing of longtime Republican high rollers, while challengers Joe Donald and JoAnne Kloppenburg have the support of wealthy Democratic contributors.

Bradley was picked by Republican Gov. Scott Walker three months ago to fill a vacant seat on the court after the death of Justice N. Patrick Crooks last September. Crooks had not intended to seek reelection. Bradley raised about $228,300 in the last half of 2015.

Kloppenburg ran unsuccessfully for the Supreme Court in 2011 against Justice David Prosser. She was elected in 2012 to the Fourth District Court of Appeals in Madison. Kloppenburg raised about $251,250 in the last half of 2015, including a $100,000 personal loan and about $38,400 in in-kind contributions from the candidate.

Donald is a longtime Milwaukee County Circuit Court judge who was appointed to the bench in 1996 by GOP Gov. Tommy Thompson and has won re-election since then. Donald raised nearly $141,300 in the last half of 2015.

The two candidates who finish with the most votes in the Feb. 16 primary will face off in the April 5 general election for a 10-year term on the state’s high court.

Bradley’s top contributors, who are also longtime donors to Republican statewide or legislative candidates, include:

Daniel F. McKeithan, of Milwaukee, owner of Tamarack Petroleum, $10,000. Initially, McKeithan contributed $2,500 on Oct. 26 and $10,000 on Dec. 22 to Bradley, which would be a violation of the maximum $10,000 calendar-year limit to a statewide candidate. However, the report shows McKeithan requested the campaign reattribute the earlier contribution to his wife.

Kloppenburg’s top contributors, who are also longtime donors to Democratic statewide or legislative candidates, include:

Judith and Gordon Faulkner, of Madison, owners of Epic Systems, $10,000 each.

Donald’s top contributors, who are also longtime donors to Democratic statewide or legislative candidates, include:

Patrick Dunphy, of Brookfield, an attorney with Cannon & Dunphy, $4,000.