Citizens for a Strong America

This is a conservative, phony issue ad group with a Beaver Dam, Wisconsin address that claims it’s made up of citizens, businesses and nonprofit groups. The group advocates for lower taxes, increased public safety and parental control over a child’s medical, psychological and educational needs, according to its website.  At the time of the election the group’s website, citizensforamerica.net,* was registered to a John Connors whose Milwaukee address was in the same building as Americans for Prosperity, a phony issue ad group that’s been involved in past Wisconsin elections. Connors is also a former national director of Students for Prosperity, an arm of Americans for Prosperity.

The second ad  featured a statement by Troy Merryfield, who publicly claimed in 2008 that Prosser "dropped the ball" in the late 1970s when he did not prosecute a Green Bay area priest that Merryfield and his brother accused of sexually abusing them.  Prosser was Outagamie County district attorney at the time and the priest went on to abuse other children before he was sent jail in 2004.  But in the group's ad, Merryfield defended how Prosser handled the case and says "now we're being victimized again" because Kloppenburg did not condemn the ad and tell its sponsor, the Greater Wisconsin Committee, to pull it.

*An ICANN WHOIS search conducted on May 16, 2017 shows that the organization's 2011 web address is now registered to what appears to be a Japanese web domain registration company.

This is a political action committee for the Progressive Change Campaign Committee.  As the PAC name suggests, it was formed to get involved in various recall campaign efforts underway against Republican state senators.

This is the political action committee of the Wisconsin chapter of The Sierra Club, a pro-environment membership organization with a major focus on lobbying and long a player in Wisconsin electoral politics.

The Sierra Club intended to support JoAnne Kloppenburg in her bid to unseat incumbent Wisconsin Supreme Court Justice David Prosser in the April 5, 2011 election but reported no spending.

This political action committee is controlled by the Family Research Council, a Washington D.C.-based conservative organization that opposes abortion and promotes marriage between men and women.

The national group’s state arm, the Wisconsin Family Council, has spent an estimated $150,000 on independent expenditures and phony issue ads spending in Wisconsin since 2006 to support Republican candidates for the legislature and a pro-marriage referendum.

The Faith Family Freedom Fund registered with the state's Government Accountability Board to make independent expenditures to support incumbent Wisconsin Supreme Court Justice David Prosser in the April 5 spring election against challenger JoAnne Kloppenburg, an assistant state attorney general. The group sponsored radio ads supporting Prosser on 34 stations across the state during the week before election day.  You can hear the radio ad it ran below.

ProgressWorks.org only registered with the Government Accountability Board on March 13, 2011 and filed an oath of independent disbursements supporting JoAnne Kloppenburg on March 28.

ProgressWorks.org self-described mission is to provide logistical support for progressive political and issue campaigns. (As of May 16, 2017 the progressworks.org domain appears to be owned by an oganization in Maine that concentrates on job creation.)

The Jensemas run a large dairy operation ($2.5 to $5 million in annual revenue) in the Sheboygan Falls area. Both Roger and Martha have a history of making modest contributions to local Republican legislators.

All reported spending was on an ad in a local news weekly.

On July 5, 2011 - three months after the April 5 election -  the PAC reported nearly $10,000 on mailings supporting Justice Prosser during the spring campaign.

This PAC placed ads supporting JoAnne Kloppenburg for the Supreme Court in various newspapers circulated in southwestern Wisconsin. The election was held on April 5, 2011.

This statewide, anti-abortion advocacy group has long engaged in outside electioneering activities in legislative and statewide campaigns. The organization typically uses its PAC to support a wide-range of legislative candidates through independent expenditures as it did most recently in the 2010 elections. In 2010 it also registered as a corporation to make independent expenditures in a targeted state senate race.

Before this election, the last time this group used issue ads was the 2006 gubernatorial campaign when it ran an issue ad touting Republican gubernatorial candidate Mark Green’s oppostion to stem cell research.

In the 2011 spring election, Wisconsin Right to Life’s PAC spent a small amount on independent expenditures to support Justice David Prosser before the February 15 primary.  Prosser faced Assistant Attorney General JoAnne Kloppenburg in his bid for another 10-year term on the Wisconsin Supreme Court.

Right to Life sponsored two different flyers that suggested Prosser would uphold any "pro-life" laws passed by the legislature that might be challenged in the State Supreme Court. The flyers cited Prosser’s vote for "pro-life" legislation when he was in the legislature. They contrast his record with the lack of a clear position on abortion by Kloppenburg but also claimed she received money from the director of NARAL Pro-Choice Wisconsin, a "strongly pro-abortion" group. 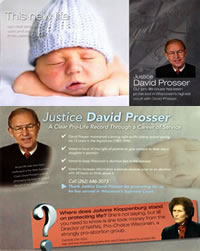 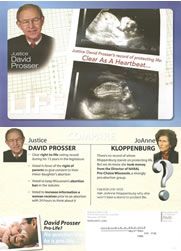 This political action committee first registered with the Government Accountability Board on March 25, 2011. It supported JoAnne Kloppenburg for the Supreme Court.

Page 2 of 5
Join the democracy Campaign