This Washington-based organization registered with the Government Accountability Board as a corporation on March 24, 2011 to conduct independent expenditures in two elections. First, it supported JoAnne Kloppenburg in her attempt to unseat incumbent Supreme Court Justice David Prosser in the April 5 election. It was also involved in the special election to fill the Milwaukee County Executive office vacated by Governor Scott Walker. It supported political newcomer and winning candidate Chris Abele over Republican Assembly member Jeff Stone, an ally of Walker's.

Working America is an affiliate of the AFL-CIO.

This Waukesha-based political action committee first registered with the Government Accountability Board on March 23, 2011 and filed an oath of independent disbursements to support of incumbent Supreme Court Justice David Prosser in the April 5 election.

This political action committee first registered with the Government Accountability Board on March 1 and filed an oath of independent disbursements in support of JoAnne Kloppenburg's candidacy for the Supreme Court on March 24, 2011. She opposed incumbent David Prosser in the April 5, 2011 election.

At the time of the Supreme Court election the organization claimed as its main mission the recall of Wisconsin Governor Scott Walker.

United Wisconsin was started by Michael Brown, who's online bio identifies him as a website developer. The website was registered on February 26, 2011.

This newly formed political action committee first registered with the Government Accountability Board on March 24, 2011 in order to support JoAnne Kloppenburg in the April 5 Supreme Court election and to oppose the incumbent Justice David Prosser.

The committee's treasurer is a Madison resident named Lewis A. Friedland.

This Ashland-based political action commitee first registered with the Government Accountability Board on March 24 in order to support JoAnne Kloppenburg in the April 2011 election for Supreme Court.

One of the PAC's contacts, Debra Lewis, is an attorney who has  contributed to Democratic candidates in the past.

This Madison-based group was created in 2008 to support Democratic candidates for statewide office and the legislature mostly with grassroots organizing, canvassing, door-to-door literature drops and negative mailings. 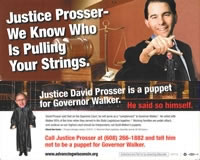 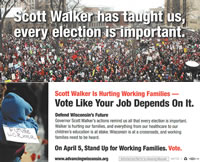 The group made independent expenditures in the 2008 and 2010 fall elections and sponsored phony issue ads in the 2009 spring elections.

Advancing Wisconsin sponsored a flyer against incumbent Supreme Court Justice David Prosser who faced challenger JoAnne Kloppenburg for a 10-year seat on the state’s high court in the April 5 spring elections. The flyer called Prosser a puppet of Republican Governor Scott Walker. It said the pair voted the same 95 percent of the time when they served together in the legislature in 1995-96, and that they both favor breaks for big corporations over working families.

Advancing  Wisconsin's second flyer did not name a candidate in the Supreme Court election but portrayed the April 5 election as a chance to vote against Walker and his policies.

Some background: Early in 2011 Walker introduced a controversial plan to abolish most public employee collective bargaining rights. The plan drew weeks of protests at the State Capitol by tens of thousands of state and local public employees and their supporters. Fourteen Democratic senators left the state in mid-February for nearly a month in an unsuccessful effort to prevent the GOP-controlled state Senate from passing the bill. By the time of the Supreme Court election, the controversy had resulted in recall efforts against 16 Democratic and Republican senators.

This is the state’s largest business organization, one of the most powerful players in Wisconsin politics and a backer of mostly Republican candidates that has spent about $11 million on phony issue ads since 2006 in Wisconsin fall general elections and the 2007 and 2008 races for the state Supreme Court.

Like other phony issue ad groups, Wisconsin Manufacturers & Commerce refuses to disclose how much money it raises and spends on outside electioneering activities which consist mostly of radio and television advertising.  The Democracy Campaign estimates that WMC spent $1.1 million on the race but the group said later in a 2013 message to its members that it spent $2 million in the Prosser-Kloppenburg contest.

About two weeks before the April 5 spring elections, the group sent its members a fundraising letter urging wealthy business interests to contribute generously to its ad campaign to oppose Supreme Court candidate JoAnne Kloppenburg’s so-called “radical agenda.” Kloppenburg, an assistant attorney general at the time, was running against incumbent Justice David Prosser for a 10-year term on the high court.

At the same time, the group also sponsored a 30-second television ad supporting Prosser. It said more than 60 sheriffs and district attorneys praise Prosser’s work as a justice.

A second ad released about a week before the spring election used audio clips of Kloppenburg to accuse her of not being tough on crime.

In 2010, Prosser spearheaded a 4-3 court majority that approved judicial rules written by Wisconsin Manufacturers & Commerce and the Wisconsin Realtors Association to allow judges to rule on cases involving their biggest campaign contributors and outside independent groups that sponsored issue ads and other electioneering activities to support or oppose judges at election time.

This PAC first registered with the Government Accountability Board on March 18, 2011 and filed an oath of independent disbursements in support of Supreme Court candidate JoAnne Kloppenburg on the same day.

The PAC's treasurer, Alfred Matano, is an employee of the Wisconsin Department of Health Services and a Dane County supervisor who has made modest contributions to Democratic candidates in the past.

J. Thomas Haley is a Middleton-based attorney who registered as a PAC in order to make independent expenditures on behalf of JoAnne Kloppenburg's 2011 campaign for the Wisconsin Supreme Court.

Haley made financial contributions to the Supreme Court candidacies of Linda Clifford and Chief Justice Shirley Abrahamson. He also made contributions to former governor Jim Doyle when he was the state's attorney general.

Page 3 of 5
Join the democracy Campaign