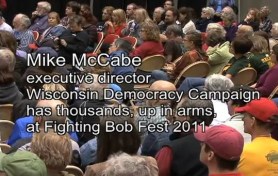 Video courtesy of
On The Earth Productions

A symbol of the weirdness that’s burned into memory: The inflatable palm trees demonstrators were carrying during the height of the mass protests to poke fun at the Fox News coverage. How weird is it that a national news network showed its audience footage of protesters resorting to violence in Wisconsin and there were palm trees swaying in the background?

How weird is it that when millions of Americans are looking for real news and some honest-to-goodness truth telling about what’s going on in the country, they tune in to Comedy Central?

Now I read in the newspaper that there are rural towns in Wisconsin that are tearing up their paved roads and putting down gravel instead. I grew up on a farm on a dirt road in Clark County , and we always saw paved roads as a sign of progress. Now we’re going backward. That wouldn’t be so weird if state money for road construction had been cut by 15%. But there’s a 15% increase in the state budget for road building. Those in charge at the Capitol just don’t want the local town road crews to have any of it. They want it all to go to the private contractors who make all the campaign donations.

These are weird times. I don’t want you to take this the wrong way. And I sure don’t want my wife to take this the wrong way. But I was lying in bed last night thinking about Tommy Thompson. How weird is that? Here you’ve got a guy who became Republican leader in the Assembly some time shortly after his birth, and went on to become a four-term Republican governor. Yet now the Club for Growth says Mr. Republican can’t belong to the club anymore. He’s not conservative enough. Not extreme enough. They’re running ads saying Thompson’s not a real right-winger. So Mr. Republican has to respond by saying that’s a malicious lie and insisting that he really is enough of a wacko to belong to the club. These are weird times.

Amid the weirdness, it’s important to remember this. We gather here today on the 100th anniversary of the most amazing legislative session in Wisconsin history. Maybe the greatest in American history. In that 1911 session, the Wisconsin legislature created the nation’s first workers compensation system. Sweeping railroad regulations were enacted. Insurance industry reform and the establishment of a state life insurance plan. The first progressive income tax. Vocational and technical education systems were started. Historic blows for worker rights, as maximum work hours for women and children were set.

What happened in 1911 was no accident. It happened because of what was done years earlier. In 1897, bribery, illegal voting and election fraud were outlawed. In 1905 donations and election spending by corporations were banned. These actions were the foundation upon which the 1911 session of the legislature was built.

Think about it. Wisconsin became a state in 1848. Bribery was outlawed in 1897. Bribing a public official was perfectly legal for the first half century of statehood. Then it was criminalized. Now it’s legal again. The bribes are now called “campaign contributions” and “independent expenditures” and “issue ads.”

There used to be poll taxes and later they were outlawed. Now they’ve brought them back, masquerading as a requirement that voters have a photo ID in order to cast a ballot.

Criminal rackets have long required the payment of protection money. How is what wealthy interests are doing in the political arena any different? Just look at what’s happening to wind power projects in Wisconsin . Oil and gas interests invested vast sums in the election of Scott Walker. The Koch brothers alone spent more than $1 million to put him in office. Real estate and construction interests, also lobbying to block wind energy development, put $1.2 million behind Walker ’s campaign. Since becoming governor, Walker has deep-sixed close to a dozen wind energy development projects.

Ask anyone in this room . . . hell, ask anyone in the state if they think it’s a good idea for America to become more independent of foreign oil. Ask anyone if they think developing alternative energy sources makes sense. You’ll almost universally get a resounding “yes” for an answer. Yet Wisconsin is erecting all kinds of barriers to wind energy development. Why? Because those who want to keep us addicted to oil paid protection money.

Road builders made Scott Walker the number one recipient of their campaign contributions. They wanted $800 million in federal rail funds to go to “crumbling” roads instead. Walker and his allies threw away the $800 million. Other states got our money. Why? Because interests who want to keep us in cars paid protection money. Yet we’re seeing a return to dirt roads in rural areas of our state as rural towns rip up their pavement and put down gravel instead. Why? Because the private road contractors paid protection money and got the state to send all the construction money to them, not the local townships’ road repair crews.

Call it vending machine politics. Toll booth democracy. Some call it a fancy word – plutocracy – that hardly anyone knows. Some want to use the F word even though it’s fruitless because next to no one distinguishes between early-onset fascism and the late-stage form that involves gas chambers and that kind of thing.

Call it what it is . . . a criminal enterprise.

There is a criminal syndicate behind most all criminal enterprises. Modern day politics is no different. To control what people read, see and hear, those in power created their own media organizations to spread their propaganda. Big ones like Fox News. Small ones like Wisconsin Reporter. To control elections, they turned them into auctions, effectively taking the “r” out of free speech and making sure front groups of their making do most all of the talking. They brought back poll taxes.

Once the elections are over and attention turns to lawmaking, they have their bill mills like the American Legislative Exchange Council, better known as ALEC, to draft model legislation that is pedaled to state lawmakers across the country.

And to defend the laws they write against legal challenge, they’ve stacked the courts. What used to be the third branch of government is now an extension of the other two. What used to be a check on the power of the executive and legislative branches is now a rubber stamp. Look no further for evidence than the assault on worker rights in Wisconsin . When a lower-court judge ruled that the law abolishing most collective bargaining rights was illegally passed because the Legislature failed to follow the open meetings law, a state Supreme Court justice ruled that the judge was wrong to rely on laws that “apply to the Legislature except when the Legislature says they do not.”

They built this juggernaut with boatloads of money, of course. But they also had a carefully conceived plot and a gift for public relations.

Have you ever noticed that whatever they plan to do they accuse their opponents of doing first? When they set out to create a vast propaganda network masquerading as legitimate news organizations, they first spent years screaming MEDIA BIAS! When they wanted to bring back poll taxes and otherwise rig elections, they first incessantly squealed VOTER FRAUD! Before launching a three-decade long class war, systematically dismantling progressive taxation and cementing in place economic policies that led to massive transfers of wealth from the poor and middle class to our society’s most affluent, they met every plea for social and economic justice with the screeching condemnation CLASS WARFARE! When they plotted to legislate from the bench and reinterpret the First Amendment to remove the “r” from free speech, they first shouted JUDICIAL ACTIVISM! umpteen times and branded moderate and liberal judges alike “judicial activists.”

All I can say is that if they ever start accusing their opponents of backing socialized castration, watch your flies men!

This is going to sound funny, but to combat this madness the first order of business can’t be tax or economic policy, it can’t be holding Wall Street to account, it can’t be health care, it can’t be education, it can’t be climate change or clean air & water.

“You can’t tackle the jobs problem, the budget problem, the tax problem…without tackling the first problem – money in politics. It is corrupt. It is institutionally corrupt.”

I am not the first person to say this. Would you believe that I am quoting a Republican presidential candidate? A current GOP candidate?

Our state and our country have been run off the rails. If we are to get back on track, the first order of business needs to be recriminalizing bribery. Doing away with the new poll tax. Restoring our democracy.

To set the stage for this year’s Fighting Bob Fest, Ed Garvey asked Bob Festers if it is time to start a third party. I know if Jim Hightower were here right now, he would crack wise and say that he’d settle for two. I’m holding out for one that’s worth a damn. If there is to be any party building movement, it needs to focus on creating a first party, not a third. We need at least one party that isn’t hopelessly beholden to the less than 1% of the population that makes all the campaign contributions but rather works for the other 99% of us.

And you all have to come to terms with the fact that the Republicans couldn’t have done what they did in Wisconsin this year unless Democrats did what they did a year ago or two or 10. The Republican Party would not have become what it has without Democrats becoming what they are.

When wackos are in charge, the last thing on earth that is needed is a bunch of weenies as the alternative.

We need some smart young person to invent a miracle pill – a sort of Viagra for the spine. And we need to persuade progressive politicians to take it. Then if you see politicians with stiff spines and erect posture lasting more than 4 hours, you need to call the Capitol switchboard at once and tell them to take more pills.

Until those magic pills kick in, I leave you with this thought….

“Only a crisis – actual or perceived – produces real change. When that crisis occurs, the actions that are taken depend on the ideas that are lying around. That, I believe, is our basic function: to develop alternatives to existing policies, to keep them alive and available until the politically impossible becomes politically inevitable.”

These are not normal times. Things are so freaking messed up I’m lying in bed thinking about Tommy Thompson and quoting Milton Friedman.

If we do these things, the history we are celebrating today will repeat itself.