This article was adapted from Rothschild’s remarks Sept. 17 on the Cap Times Idea Fest panel “What’s Next for Progressives in the Age of Trump?”

If I read one more Facebook post on how bad Bernie is or how bad Hillary is and how reprehensible their respective followers are, I’m going to die. It’s over. Move on! I swear, if I’m at one more party with friends where this argument breaks out, I’m going to leave the party – even if it’s at my own house! We’ve got bigger problems on our hands right now – in Wisconsin, and in Washington. As Representative Gwen Moore said at the Cap Times Idea Fest panel I was on, “We need forgiveness.” All around. And then we need to move forward together.

The bickering also needs to stop within the Democratic caucus in the legislature. There are tremendous progressives in the caucus, but some Democratic elected officials in the Assembly can’t stand each other, and barely speak to each other. The same holds true for some Democrats in the State Senate. And Assembly Dems sometimes don’t get along all that well with Senate Dems. Folks, we’re dying here! We don’t have time for your ego spats. Get your stuff together.

2. The Old Guard Needs to Go

I greatly admire the old guard progressive elected officials at the state and local level in Wisconsin. They’ve served with honor and distinction and courage; they’ve given a huge chunk of their lives to stand up for progressive principles. We all owe them a big debt of gratitude. But many of them have been in office for a long, long, long, long time. Some may be looking more backwards than forwards, and in any case, they all need to give other people a chance. They’re clogging the pipes of leadership. They’re preventing a good bench of progressives from getting into the batter’s box. Take a bow, and enjoy your retirement. You’ve earned it.

There are good, decent Republican officials out there. Some are more progressive than they might appear, since they can’t get too out of line with their leadership or they’d be “primaried” out of a job. Progressive Democratic officials should ally with them when possible, and progressive activists should salute them when they do the right thing.

State Representative Katrina Shankland highlighted this point at the Cap Times Idea Fest, and Bernie’s success reflects it, too. One reason Bernie won 71 of 72 counties here in Wisconsin is because he was who he always was: a cranky old socialist Jew from Vermont who never combed his hair in his life! He never tried be anybody he wasn’t. People are sick and tired of politics as usual and politicians as usual. They want someone who is real.

First and foremost, universal health care: Everyone would benefit from this in the most concrete way. We all know the health crises that could submerge us at any moment, literally costing us our lives and our hard-earned money if we don’t have decent health coverage. And if we go back to the bad old days before the Affordable Care Act, millions of Americans will be forced to stay in jobs they hate until they are 65 just so they can get health insurance. We need Badger Care for All, and Medicare for All. 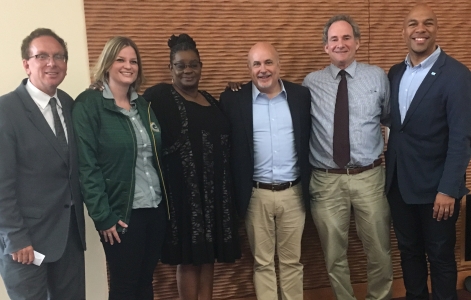 Other issues are crucial, too, and I’m just going to name a few here: People need a living wage, and they soon will need a guaranteed minimum income, since there may not be enough jobs to go around when the robots and artificial intelligence fully take over.

We need college education to be free, and we also need student debt forgiveness. Here’s a shout out to Scot Ross at One Wisconsin Now for bringing the issue of student debt to the fore. The weight of this debt is crippling two generations and stifling our economy.

We need to bolster our public schools, which are the center of community life, and the only thing close to being an equalizer in our society.

We need to legalize marijuana – and to stop imprisoning people for using this drug, which is a lot safer than alcohol and tobacco. Here’s a shout out to Representative Melissa Sargent for championing this one.

We need a Green Jobs Initiative. We should be putting solar panels on every government building and on top of every school bus in Wisconsin, and we should be erecting wind turbines in our state parks and forests. Robert Kraig at Citizen of Wisconsin has been pushing this initiative, to his credit.

And we need to democratize our democracy here in Wisconsin. That means automatic, universal voter registration, as Dana Schultz at Wisconsin Voices advocates. That means fair maps -- non-partisan redistricting (no more gerrymandering!). That means banning corporations and other groups from donating to political parties and legislative campaign committees. That means requiring dark money groups to disclose their donors. That means banning coordination between candidates and outside groups. That means greatly reducing the amount of money that rich people can give to statewide candidates (right now it is $20,000!).

Wisconsin ranks at the bottom of several scales when it comes to racial inequality. This is not only embarrassing, it’s appalling. Racism that is just under the surface and institutional racism continue to plague us here in Wisconsin. We see it in our judicial system, and we see it in employment, we see it in our schools, we see it in housing policy, we see it in transportation policy. It’s everywhere. As progressives, we need to make the fight for racial justice an integral part of all our work.

To make fundamental change, we need to put the lie to the corporatist ideology that we’re being fed every day by the Koch Brothers and by ALEC and by Wisconsin Manufacturers and Commerce. At the heart of that ideology is the belief that everything private is good, and everything public is bad.

Hell, Walker and the GOP-controlled legislature won’t even fund our public parks!

In the corrupt and parched corporatist worldview, there is no place for the common good, no sense of community, and no sense that we, as fellow citizens of a democracy, have any obligation whatsoever to each other, and no sense that good government programs can help us fulfill that obligation.

We also need to recognize and respond to the dire threat that Donald Trump poses to our democracy. He is the closest thing we’ve ever had to a Fascist in the White House, and I use the “F” word advisedly. For two of the calling cards of the Fascist are bigotry and hyper-nationalism. Trump has displayed his racism for all to see – during the campaign, by going after Muslims and Mexicans, and with his outrageous comments after Charlottesville. And Trump boasts about being a “total nationalist,” and he plays on feelings of aggrieved national pride, which was a standard trope of Hitler and Mussolini. That’s what “Make America Great Again” is all about – fueling this feeling of diminished glory (while also taking a swipe at the black man who was in the White House before him). Trump has no respect for our democratic institutions: He calls the media “the enemy of the people,” he mocks the judiciary, and he’s issued an executive order allowing the immigration service to deport not only anyone who has committed a crime, but anyone who has been charged with a crime, and even anyone who is “chargeable” with a crime! I worry that if there’s another attack on the United States – and it doesn’t have to be anywhere near the scale of 9/11 – Trump could take our democracy down. I don’t have tremendous faith in our storied system of checks and balances. Chile had a democracy for 100 years, and it died in a night. It’s not for nothing that James Clapper, former Director of National Intelligence, said recently on CNN that Trump is “downright scary” because Clapper understands, he said ominously, “the levers of power that are available to a President.”

While we, Wisconsin progressives, understandably want to rescue progressivism in our state, we also have to make sure that the whole project of democracy in America does not go down the tubes in one fell swoop.

OK, back to tactics: Obviously, we need to get progressive voters registered and we need to motivate them to go to the polls to vote for progressive politicians from whatever party. That’s basic.

10. Talk to People Who Don’t Agree with Us

Also basic is the need to talk to people who don’t agree with us. This is especially true here in Madison. If you live on the Near East Side, or if you live on the Near West Side, and you work at the university or you work for a progressive nonprofit, you can go a whole week without bumping into anyone who disagrees with your politics. You can watch Democracy Now in the morning, go to work with your like-minded colleagues, go home and turn on MSNBC, get in bed and read The Nation, and then start all over again the next day.

This is not healthy. It doesn’t build your intellectual muscles. It doesn’t nourish understanding or empathy. And it’s horrible politics because the essence of politics is convincing people who don’t already agree with you that your vision for the good and just society is the right one. So we need to get out of our cocoons, and go do the work of listening to our fellow Wisconsinites who aren’t yet on our side (most of them are not flying Confederate flags), and seeing where they’re coming from, and talking with them respectfully and at a human level about the kind of society we’d all want to live in.