The U.S. Supreme Court’s Citizens United decision of 2010 has had a powerful – and profoundly negative – effect on Wisconsin politics.

As this report from the Wisconsin Democracy Campaign shows, the spending in Wisconsin state elections by outside special interest groups has skyrocketed over the last decade as a result of this decision.

In its 5-4 decision in Citizens United, the conservative majority ruled that corporations and other outside special interest groups can spend unlimited amounts of money to back candidates so long as they don’t coordinate their expenditures with those candidates.

To gauge the effect of Citizens United in Wisconsin, we took a look at how spending by independent expenditure groups – those that expressly tell people who to vote for or against – has gone up in the last decade. All told, it increased five-fold in the 10 years since this decision (see Chart 1 below). And in races for governor and attorney general, it has leaped much higher than that. 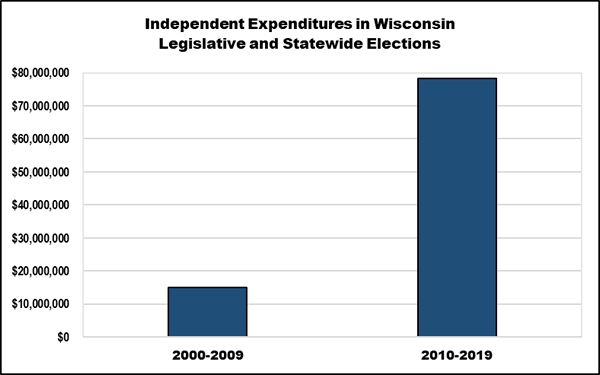 The $78.2 million spent between 2010 and 2019 does not include more than $46 million spent on independent expenditures in the unprecedented 2011 and 2012 recall races. The figures also do not include the millions of dollars spent by secretive phony issue ad groups, which do not have to disclose their spending. Phony issue ad spending also continued to increase over the past 10 years, in part because of Citizens United and a prior Supreme Court decision, Wisconsin Right to Life v. FEC , in 2007.

One problem with this surge in outside spending is that it drowns out the message of the candidates themselves. These groups have been outspending the candidates in some races. For example:

Another problem is that these post-Citizens United electioneering groups are mostly funded by wealthy out-of-state individuals, corporations, and unions that are not in tune with the needs of Wisconsin constituents. 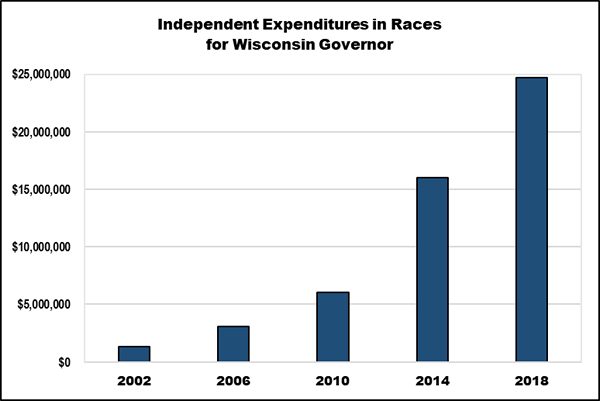 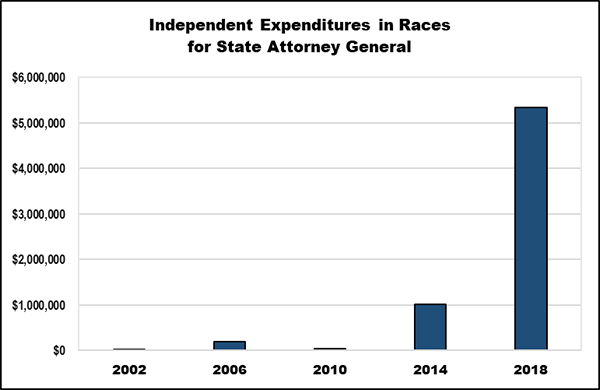 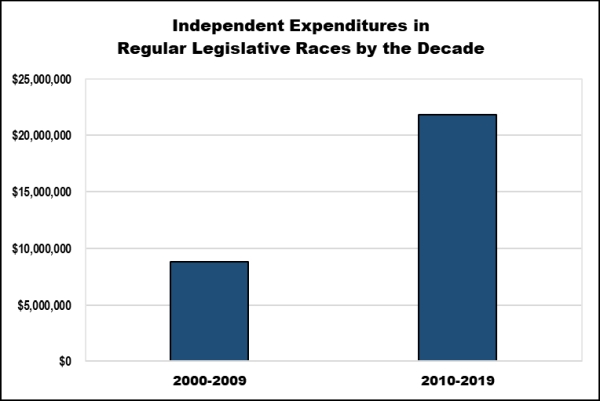 Nineteen special interest groups have spent more than $2 million on independent expenditures or phony issue ads or both since the beginning of 2010. The top spenders are:

Greater Wisconsin Committee, $40.8 million, to support Democratic and liberal candidates in legislative and statewide elections.  The group discloses little about its fundraising but gets the bulk of its cash from labor unions and Democratic ideological groups, like the Democratic Governors Association, that are also supported by wealthy business interests. Greater Wisconsin operates a political action committee, corporation, issue ad group and a 527 organization;

Republican Governors Association, $29.5 million, to support former GOP Gov. Scott Walker. The group, which spends tens of millions of dollars to elect Republican governors across the country, used ACC Wisconsin PAC and Right Direction Wisconsin PAC to sponsor its Wisconsin electioneering activities. The group raises much of its money from wealthy individual and corporate special interests using a 527 organization;