The People’s Legislature rallied today at the Capitol to shine light on the efforts of legislative leaders to run out the clock on the 2007-2008 session, which is ending seven weeks earlier than last session, and the failure of lawmakers to act on a number of high-profile bills with broad public support.

Madison - The People’s Legislature rallied today at the Capitol to shine light on the efforts of legislative leaders to run out the clock on the 2007-2008 session, which is ending seven weeks earlier than last session, and the failure of lawmakers to act on a number of high-profile bills with broad public support.

Democracy Campaign director Mike McCabe made opening remarks, and said this legislative session “has been an embarrassment to the people of Wisconsin” and went on to say that “what we’ve seen is gridlock by design. It was choreographed stalemate.”

He highlighted the state Senate’s passage of the Impartial Justice bill creating publicly financed state Supreme Court elections on a bipartisan 23-10 vote, only to have the bill held up in the Assembly. He also said legislation requiring full disclosure of special interest electioneering was passed unanimously by the Senate, but is being blocked in the Assembly.

“How can one house be unanimous and the other house refuse to even vote?” McCabe asked. “They represent the same voters.” 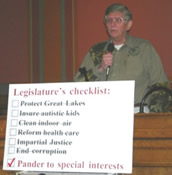 Former Department of Natural Resources Secretary and Wisconsin Wildlife Federation director George Meyer issued a stinging indictment of the Legislature’s stonewalling of a bipartisan measure restoring independence to the DNR by giving the authority to appoint the agency’s secretary back to the Natural Resources Board. Under former Governor Tommy Thompson, the authority was taken from the board and given to the governor.

Meyer said the state Conservation Congress overwhelmingly supports an independent DNR, and noted overwhelming citizen support for the idea at public hearings on the legislation. No citizen testified against the plan, with opposition only coming from a handful of business lobby groups.

Meyer also cited a “supermajority” in the Legislature that either have sponsored the legislation or voted for it, yet Assembly leaders have blocked a final vote. He said legislative leaders have acknowledged that the Senate-passed bill would get somewhere between 70 and 75 votes in the Assembly, but it will not be debated because of “business opposition.” (Video below).

Bruce Speight of Wisconsin Public Interest Research Group told of similar obstacles that have been erected in both houses preventing passage of a statewide ban on smoking in public places, even though polls show such a ban enjoys broad public support. And Jessica Garrels of Wisconsin League of Conservation Voters cited polls showing that more than 80% of state residents want the state to take action to reduce global warming emissions, yet state lawmakers have blocked final passage of legislation addressing climate change.

After the rally, participants delivered petitions to the offices of Assembly Speaker Mike Huebsch and Senate Majority Leader Russ Decker saying "I don’t get to stop working for the year on March 13th, and my elected representatives shouldn’t stop either" and then urging them to continue work in both houses on the Impartial Justice bill, a ban on campaign fundraising during the state budget process, and legislation requiring full disclosure of all electioneering.

Video courtesy of On the Earth Productions