Share:
Republican lawmakers are seeking support for a bill that would allow the state to impose lighter penalties for violations of animal feed regulations. GOP Lawmakers Want to Alter Penalties for Animal Feed Violators 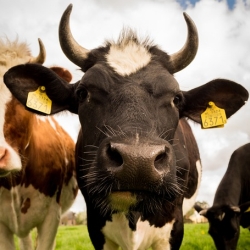 Republican lawmakers are seeking support for a bill that would allow the state to alter penalties for violations of animal feed regulations.

Under current law, a commercial feed manufacturer or distributor who violates animal feed laws faces criminal penalties of up to $200 or up to six months in prison, or both. This bill creates a civil penalty option for the state Department of Agriculture, Trade and Consumer Protection, which administers agriculture regulations, to use for less serious offenses, such as first-time or accidental violations, according to the bill’s authors, Sen. Terry Moulton, of Chippewa Falls, and Rep. Lee Nerison, of Westby.

The bill creates a civil forfeiture of between $100 and $500 for the first violation, and a fine of between $200 and $1,000 for additional violations that occur within five years of the first offense. A manufacturer or distributor who intentionally violates animal feed laws faces penalties of up to $5,000 or up to a year in prison, or both. Any other person who intentionally violates these law would face a fine of up to $1,000 or up to 30 days in prison, or both.

It’s not yet known where agriculture interests, which are an influential force on Wisconsin elections, stand on the proposal.

The agriculture industry contributed nearly $2.8 million between January 2011 and June 2015 to all legislative and statewide candidates, including about $733,000 to current GOP lawmakers. Republicans control both houses of the legislature by comfortable margins. Moulton received nearly $17,300 and Nerison received $6,200 in direct contributions from agriculture interests between January 2011 and June 2015.

In addition to direct contributions, Volunteers for Agriculture, a political action committee (PAC) controlled by the Wisconsin Farm Bureau Federation, spent about $378,000 on outside electioneering activities, known as independent expenditures, between January 2011 and December 2014. The PAC spent about $29,600 to support Moulton and about $19,300 to support Nerison.