Share:
A bipartisan bill that would legalize the sale of homemade baked and canned goods has farmers and a conservative ideological group at odds with restaurants, grocers, and public health officials. Opponents Say “Cookie Bill” is Cookie Monster, and Not the Funny Kind 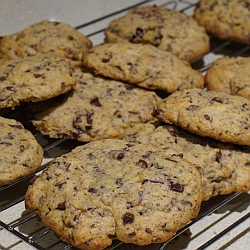 The measure, Senate Bill 330, would allow individuals to sell up to $7,500 worth of home baked and canned goods a year. The sales would have to be face-to-face sales from the home or at events. Door-to-door sales are prohibited. The measure, which was approved by the Senate last month and awaits Assembly action, is backed by 42 Democratic and Republican lawmakers, which is nearly a third of the legislature.

A similar bill in 2013 was passed by the Senate but failed to get Assembly approval. Wisconsin and New Jersey are the only two states with outright bans on sales of cookies, muffins, breads and other homemade products by individuals.

Opponents of the bill say current law protects the livelihoods of small merchants and businesses in the food industry, as well as public health because facilities used by food producers with commercial licenses must meet food preparation standards.

Supporters of the bill say it hurts farmers and homemakers who just want to make a few extra bucks to help their families.

In addition to the bill, three farmers have sued the state in court, claiming the law violates their constitutional rights to equal protection and due process.

The measure is backed by two ideological opposites, the Wisconsin Farmers Union and the rightwing Americans for Prosperity. Neither group makes direct contributions to candidates, but Americans for Prosperity secretly raises and spends unlimited amounts on outside electioneering activities to back conservative and Republican candidates for statewide office and the legislature. Americans for Prosperity spent an estimated $5.6 million between January 2010 and December 2015 on elections, putting it among the top-spending groups on statewide and legislative elections. The Wisconsin Farmers Union does not spend money on outside electioneering activities or sponsor a political action committee that makes direct contributions to candidates.

Meanwhile, grocers and restaurants, which oppose the bill, contributed about $585,100 to current Democratic and Republican legislators between January 2010 and June 2015, including about $500,600 to GOP lawmakers who control the legislature.