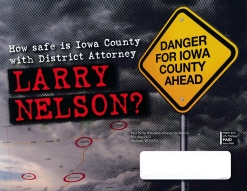 A conservative special interest group has sponsored two mailings that attacked the record of one of the county prosecutors involved in appealing a state Supreme Court decision that closed the John Doe II investigation.

The mailings against Iowa County District Attorney Larry Nelson – here and here – were sponsored by the Wisconsin Alliance for Reform. Nelson is running for Iowa County Circuit Court judge this spring. The mailings said Nelson handled three cases with plea deals or did not press charges, and that his actions threatened the safety of county residents.

Nelson is one of three district attorneys who recently teamed up to appeal the Wisconsin Supreme Court’s decision on the John Doe II investigation to the U.S. Supreme Court. The investigation looked into alleged illegal coordination between Republican Gov. Scott Walker and numerous outside electioneering groups in the 2011 and 2012 recall campaigns.

The state Supreme Court’s decision last July not only shut down the John Doe investigation but gave the green light for candidates and phony issue ad groups, like the Alliance, to coordinate their electioneering activities. Issue ad groups can raise and spend unlimited amounts on elections, and they don’t have to disclose their donors. That’s why these groups are called “dark money” groups.

Since the Alliance was formed last fall, it has run numerous broadcast ads against Democratic candidate Russ Feingold in the U.S. Senate race, and most recently in support of conservative Wisconsin Supreme Court Justice Rebecca Bradley.

Feingold faces incumbent Republican U.S. Sen. Ron Johnson in the fall elections and Bradley faces two challengers in the Feb. 16 spring primary to keep the seat she was appointed to last fall by Walker to fill a vacancy. The top two finishers in the spring primary advance to the April 5 general election for a full 10-year term on the high court.

The other two district attorneys joining Nelson in the John Doe appeal are Ismael Ozanne of Dane County and John Chisholm of Milwaukee County.