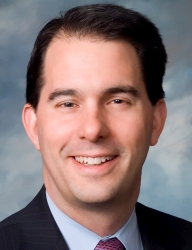 The three applicants recommended to Walker by a committee of his chief of staff and others were:

Mark Gundrum, 46, a former GOP Assembly colleague of Walker who was elected a Waukesha County circuit judge in 2010 and then appointed by Walker to the state Court of Appeals in 2011;

Thomas Hruz, 42, a former Milwaukee attorney, employee of the conservative think tank Wisconsin Policy Research Institute, and Prosser law clerk. Hruz was appointed to the District 3 Court of Appeals in Wausau in 2014 by Walker;

Daniel Kelly, a Milwaukee attorney, who was one of the lawyers hired to help successfully defend controversial GOP-drawn legislative district maps in a 2012 federal court trial.

The three finalist were among 11 applicants who originally applied for Prosser’s job. Walker said he planned to announce his choice, who does not need to run for election for a full, 10-year term on the court until 2020, before Prosser’s July 31 retirement.  The court has a 5-2 conservative majority, and Prosser is one of the five conservative justices, so Walker's choice to fill Prosser's seat is unlikely to alter the ideological split.