Share:
A Calumet County factory farm owned by the president of a powerful agricultural lobbying group and supporter of Republican Gov. Scott Walker is under state investigation for a manure runoff that polluted a Fox River tributary and killed fish in late June or early July. Factory Farm Owned by Head of Powerful Ag Group Probed for Manure Runoff 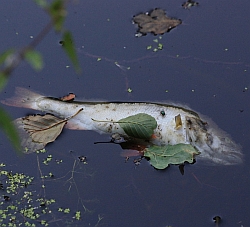 The farm, Shiloh Dairies, is owned by Gordon Speirs, who also serves as president of the Dairy Business Association (DBA). The group represents mostly large dairy farms and agri-business interests.

Ben Uvaas, a Department of Natural Resources (DNR) agricultural specialist, said in an interview that Shiloh Dairies may face some enforcement action or fines after the DNR finishes its investigation. The runoff occurred after employees of Shiloh Dairies spread thousands of gallons of liquid manure on a hay field and then heavy rains washed much of it into Plum Creek. Uvaas said Shiloh is responsible for the cleanup.

Uvaas said the DNR found about the incident from a tipster who called the DNR’s Warden Tip Line.

Media reports since 2010 show the DBA has met with the DNR to urge the agency to change the way it issues permits and regulates factory farms. The DBA is also a major lobbying force on legislative bills and state rules to loosen regulations on land use, high-capacity wells, wetlands, groundwater, and factory farms.

The DBA is backed by dozens of wealthy special interest sponsors who have contributed more than $2.1 million to Democratic and Republican statewide and legislative candidates between January 2010 and December 2015, including more than $700,000 to Walker.

The DBA also contributed $35,900 in 2014 to the Republican Governors Association (RGA). The RGA spends several millions of dollars each year to support GOP candidates for governor across the country. In 2014, the RGA’s state political action committee spent nearly $4 million to support Walker’s successful reelection.

Last week, the DNR staff released plans that will be considered by the DNR Board next month to change the state’s uniform standards for manure spreading in order to regulate or limit manure spreading in parts of the state where animal waste poses a greater risk of polluting groundwater and streams. However, the process for implementing rules that govern state agencies, which includes approval by the governor and the Republican-controlled legislature, can take years.