Share:
Enbridge Energy, one of the owners of the controversial Dakota Access pipeline, is considering expanding another pipeline that transports heavy crude from Superior, Wis., to refineries in Chicago. Law Firm to Organize Property Owners Affected By Enbridge Oil Pipeline Project 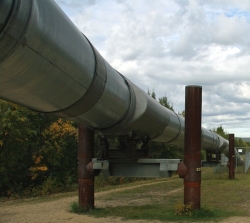 This pipeline project has also generated opposition, and this week, a law firm is meeting with Wisconsin property owners who might be adversely affected by it. Domina Law, an Omaha, Neb. firm, represented Nebraska property owners in talks with TransCanada Corp., which proposed building the 1,200-mile Keystone XL pipeline from Canada to Texas. The project was rejected by President Obama last year.

Last month, Enbridge said it was buying a stake in the contentious Dakota Access pipeline, which has come under fire after Native American tribes across the nation gathered to protest on the Standing Rock Reservation in North Dakota.

On Friday, a federal judge declined to order a halt to construction, but the Obama administration said that construction on federal land will be suspended for now.

Any future projects sought by Enbridge in Wisconsin could be made easier to carry out by a new law that was approved last year by the GOP-controlled legislature and Republican Gov. Scott Walker. The new state law, which was approved in the 2015-17 state budget, allows Enbridge to condemn land for pipeline projects. In addition, the budget also contained a provision that prohibits local governments from requiring pipeline companies to carry additional insurance beyond their general liability coverage to pay for oil spills.

The company spent about $8,800 lobbying legislators in 2015. In addition, Enbridge employees contributed $1,150 between January 2010 and June 2015, including $850 to Walker and $100 each to GOP Senate Majority Leader Scott Fitzgerald, of Juneau; Republican Sen. Alberta Darling, of River Hills; and Republican Sen. Sheila Harsdorf, of River Falls.

Environmentalists are concerned about Enbridge’s environmental record. The company paid $1.1 million to settle state claims for numerous environmental violations when it expanded its pipeline system in Wisconsin in 2007 and 2008. In 2010, an Enbridge pipeline burst in Michigan and spewed more than 840,000 gallons of tar sands crude – the largest inland oil spill in U.S. history. The incident polluted 35 miles of the Kalamazoo River, required residential evacuations and cost the company $1.2 billion to clean up. In addition, the company agreed in July to pay $177 million in fines, additional cleanup costs and for safety measures.