Share:
A state watchdog that oversees controversial for-profit colleges would be dumped under a plan by Republican Gov. Scott Walker, who has received about $56,000 in campaign contributions from for-profit college owners and employees. The Money Behind Dumping the State’s For-Profit College Watchdog 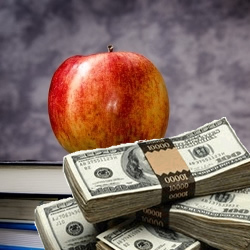 Walker’s proposed 2017-19 state budget released earlier this month would eliminate the state’s Educational Approval Board, which licenses and regulates for-profit colleges. The budget, which must be approved by the legislature, gives the board’s job to the state Department of Safety and Professional Services.

This is Walker’s second attempt to eliminate the state’s for-profit college watchdog. The governor proposed in his 2015-17 state budget giving the board’s duties to part-time staff in the Department of Agriculture, Trade and Consumer Protection, but GOP-controlled legislature removed that plan.

Between January 2010 and August 2016, the top contributors from the for-profit college industry to Walker were Herzing College founder Henry Herzing and his wife, Suzanne, of Palm Beach Gardens, Fla., $16,000; Renee Herzing, of Menomonee Falls, president of Herzing College, $8,100; $6,000 from the political action committee of California-based Bridgepoint Education; and $5,000 each from Felix Burkard, of Shorewood, a Herzing College educator, and Kaye Myhre, of Naples, Fla., owner of Globe University.

Most of these contributions were made before Herzing College converted from for-profit to nonprofit status in 2015. A growing number of for-profit colleges in recent years are converting to nonprofit status even though they’re effectively continuing to operate as for-profits because the owners have found a way to maintain some control and in some cases continue to profit from the colleges. Many of the schools converted to avoid tougher federal regulations under the former Obama administration. Other schools changed their status because the for-profit college industry has been under fire for years for their marketing practices and questions about the value of their programs and degrees to students.

Bridgepoint has been the subject of numerous lawsuits and investigations by the federal government and about a half-dozen states, including Iowa, New York and California, for fraud, consumer protection violations and recruiting practices.

In late 2015, the Education Management Corp., which ran the Arts Institute of Wisconsin, agreed to pay $95 million and forgive about $103 million in student loans to settle a federal and multi-state lawsuit, which Wisconsin did not join, that accused the company of multiple consumer fraud and illegal recruiting violations. The settlement still allowed nearly 1,000 Wisconsin students to have about $900,000 in loans forgiven.