To the Senate Committee on Judiciary and Public Safety

Testimony prepared in opposition to Senate Bills 303, 304 and 305. You can read WDC testimony against the Assembly's companion bill here.

Good afternoon, Chairman Wanggaard and other distinguished members of the Committee, it’s a pleasure to be with you today.

I’m Matt Rothschild, the executive director of the Wisconsin Democracy Campaign, a nonprofit here in Madison that’s been around now for 22 years, advocating for clean and open government and for a fully functioning democracy.

Crucial to our democracy is the right to freedom of speech and assembly and association. It is enshrined in the First Amendment of the U.S. Constitution, and it is enshrined in our Wisconsin Constitution as well. Article I, Section 3, of our state constitution says, “No laws shall be passed to restrain or abridge the liberty of speech or of the press.” Article I, Section 4, says, “The right of the people peaceably to assemble, to consult for the common good, and to petition the government, or any department thereof, shall never be abridged.”

This bill would restrain and abridge our free speech and free assembly and free association rights, and it would do so in a way that is expressly prohibited by the U.S. Supreme Court.

This bill would make it a felony to “riot,” and it defines “riot” in a peculiar and unconstitutional way.

On the peculiar side, the bill states that a minimum of three persons assembled together would constitute a group that is capable of engaging in a riot. That seems like an awfully small number.

Then, to qualify as a riot, one of two things must happen, the bill says.

First, there must be “an intentional act of violence by one or more persons” of the group. Note that all three persons (or even all 300 persons if the group was that big) could be found guilty even if just one of them engages in the violence. Plus, the act of violence doesn’t have to do actual damage to people or property. It just has to constitute “a clear and present danger of . . . damage or injury to the property of any other person or to another person.”

Second, under the bill, even if there is no act of violence at all, you can still be convicted of engaging in a riot so long as a single member of the group issues a threat of violence and so long as you can be said to be intentionally participating in the riot.

And while I do appreciate the willingness of the authors to amend their original bills, and I do appreciate the concern expressed by Representatives Tusler and Thiesfeldt at the Assembly public hearing on Sept. 21 that the bill might sweep up those who were being nonviolent, I do not believe that the amendment solves the problem.

First of all, merely by putting the word “intentional” before the act of violence and the threat of violence doesn’t do much, since it’s likely that the person engaging in violence or threatening violence had the intent to do so in the first place.

It’s still possible, once the violent act or violent threat has occurred, that everyone present can be said to be intentionally participating in the riot. There is no requirement that you have to be someone who engages in violence or someone who issues a threat of violence. You just have to be in the group where one person does that. There is no requirement that the police have to notify you to disperse because a riot is under way, and that if you don’t disperse, it will be assumed that you are intentionally participating in the riot. Everyone in the group could just be rounded up after the violent act occurs or the threat of violence is issued.

I’ve been at rallies where a person made violent threats, and that person was booed for doing so. Would the people who booed be also guilty of a felony because they didn’t leave the scene after the threat was issued, when in fact they were urging nonviolence? What if a fight broke out, and people were begging those who were fighting to cut it out? Would they, too, be guilty of a riot? Or would just those being violent? If the latter, we don’t need this bill, since fighting is already a crime.

So what does “intentionally participates” in a riot actually mean? It’s unclear. And because it’s unclear, an over-zealous prosecutor could scoop up everyone and slap the riot charge on them all.

Here’s another serious problem with SB 303: The definition of the threat of violence in SB 303 is itself unconstitutional.

The bill states that it’s a riot when there is “an intentional threat of the commission of an act of violence by one or more persons that are part of an assembly of at least three persons having, individually or collectively, the ability of immediate execution of the threat, if the performance of the threatened act of violence would constitute a clear and present danger of, or would result in, damage or injury to the property of any other person to another person.”

But what constitutes a “threat”? How explicit does it need to be? The U.S. Supreme Court has already weighed in on these questions. It has ruled on several occasions that vague threats of violence are protected under the First Amendment. In the landmark U.S. Supreme Court case Brandenburg v. Ohio in 1969, the court ruled in defense of the First Amendment rights of a Klansman who spoke at a rally and urged vengeance, in a vague way, upon Jews and African Americans. The Court ruled that such speech was protected. It said the Klansman was prosecuted for “mere advocacy not distinguished from incitement to imminent lawless action,” and that he was also wrongly prosecuted for “assembly with others merely to advocate the described type of action.”

This bill’s language on the threat of violence has the same infirmities as the overturned Ohio law in the Brandenburg case. Nothing in this Wisconsin bill stipulates that the threat must be “imminent” or “likely to incite or produce” an act of violence. All it says is that at least one person in the group has “the ability” to immediately execute the threat. That’s quite different. It also would criminalize “assembly with others” who are merely advocating a vague action.

Here’s an example: At a rally of 300 people where there a lot of speakers, one speaker says, “If this injustice goes on much longer, we should go break some windows.” Under the bill before you, not just the speaker but all the other 299 people in the assembled group could be guilty of a Class 1 Felony and face three and a half years in jail and be fined $10,000 because at least one of them, and probably most of them, could throw something through a window (thus meeting the bill’s requirement to have “the ability of immediate execution of the threat”).

But under Brandenburg, that is not sufficient, since the threat itself isn’t “imminent.”

Nor would this bill’s prohibition of threats pass muster under other U.S. Supreme Court rulings, such as the 1969 case, Watts v. United States . In the Watts case, 19-year-old Robert Watts was convicted in the lower courts of threatening the President of the United States. Watts was speaking at a rally at the Washington Monument, and was vowing to resist the draft, saying: “I have got to report for my physical this Monday coming. I am not going. If they ever make me carry a rifle, the first man I want to get in my sights is LBJ.” And Watts even made a gesture about aiming a rifle. But the U.S. Supreme Court overturned his conviction, saying it wasn’t a direct threat but only “a kind of crude offensive method of stating a political opposition to the President.” As Justice William O. Douglas wrote pointedly in his concurring opinion in Watts, “Suppression of speech as an effective police measure is an old, old device, outlawed by our Constitution.”

That is what this bill is all about: suppressing the freedom of speech. 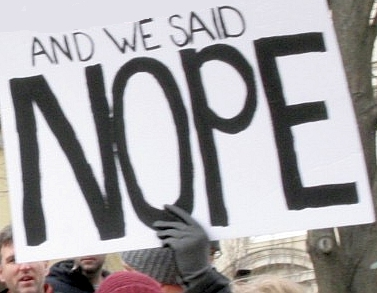 It’s also about suppressing the freedom of assembly and association, as it reeks of guilt by association.

The U.S. Supreme Court ruled in NAACP v. Claiborne Hardware Co. in 1982 that “the First Amendment restricts the ability of the State to impose liability on an individual solely because of his association with another. Civil liability may not be imposed merely because an individual belonged to a group, some members of which committed acts of violence.” It also said: “The right to associate does not lose all constitutional protection merely because some members of the group may have participated in conduct or advocated doctrine that itself is not protected.”

That pretty much blows a hole in these bills, and you’re likely to face expensive litigation in the courts trying to defend these unconstitutional bills, which is not a wise use of the taxpayer’s money.

Damage to property is already a crime.

Disorderly conduct is already a crime.

Conspiracy is already a crime.

Unlawful assembly is already a crime, and it already includes, in the Wisconsin statutes, “ blocking or obstructing the lawful use by any other person, or persons of any private or public thoroughfares, property or of any positions of access or exit to or from any private or public building.” So why do we need SB 304?

Failure to disperse is already a crime. And please note that SB 304, unlike the statute on unlawful assembly, doesn’t even offer the people in a crowd “an order to disperse.”

I urge you to vote no on these unnecessary and unconstitutional bills.

I thank you for considering my views, and I welcome any questions you might have.