Share:
A bill to loosen rules on controversial high-capacity wells was given final approval by the Republican-controlled legislature and sent to GOP Gov. Scott Walker, who says he will sign it into law. 50 Million Reasons Wisconsin GOP Backs High-Capacity Wells 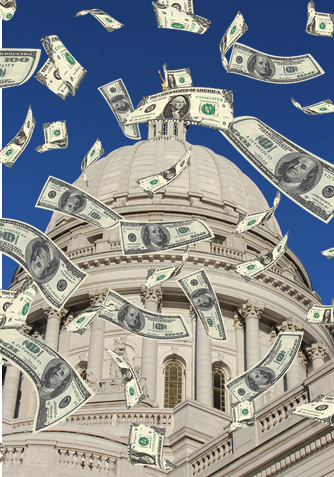 A bill to loosen rules on controversial high-capacity wells was given final approval by the Republican-controlled legislature and sent to GOP Gov. Scott Walker, who says he will sign it into law.

The measure, Senate Bill 76, was approved Tuesday by the Assembly on a 62-35 vote with one Republican, Rep. Joel Kitchens, of Sturgeon Bay, joining Democrats to oppose it. The proposal won Senate approval late last month on a 19-13 party line vote.

The bill eliminates state reviews of existing permits for any high-capacity wells when they are repaired, replaced, or sold in a real estate transaction. High-capacity wells allow users, which include large farms, food processors, and frac-sand operations, to pump at least 100,000 gallons of water a day for irrigation and other needs.

But environmentalists, tourism interests, outdoor enthusiasts and nearby property owners say high-capacity wells have caused some rivers, lakes, and streams around the state to shrink or even dry up during the summer, damaging fish, wildlife, and their habitat.

The bill was backed by a host of powerful special interest business and agriculture groups – see here – including the Dairy Business Association, Wisconsin Manufacturers & Commerce (WMC), and the Wisconsin Farm Bureau Federation.

The agriculture industry and more than a dozen other influential special interests represented by WMC, including business, manufacturing, real estate and construction, contributed $16.7 million between January 2011 and December 2016 to Republican legislators. These same interests also contributed another $33.2 million to Walker during the period. That’s almost $50 million combined.

In particular, large vegetable growers and other mega farms sharply increased their contributions to GOP legislative fundraising committees during the second half of 2016 after a similar bill failed to pass early last year. Large potato and vegetable growers doled out more than $136,000 in individual and corporate campaign contributions in 2016 to current legislators, including about $126,300 to Republicans and $10,250 to Democratic lawmakers.

Topping the list of contributions in 2016 from large farm owners to legislators and legislative fundraising committees were:

In addition to direct special interest contributions, WMC has spent an estimated $18.6 million since 2010 on mostly undisclosed, outside electioneering activities to support Republican and conservative legislative and statewide candidates.