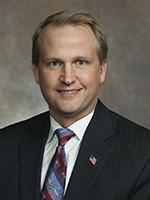 Dean Knudson, of Hudson, who served in the Assembly from 2011 through last year, was appointed to the commission by GOP Assembly Speaker Robin Vos. Knudson chose not to run for reelection in 2016.

The Wisconsin Democracy Campaign accused Knudson in a 2016 complaint to the Wisconsin Ethics Commission of violating state campaign finance laws by forming an express advocacy political action committee (PAC) called the Wisconsin Liberty Fund. The Democracy Campaign complaint, which was later dismissed, contended that Knudson violated the law by operating a PAC and a candidate campaign committee at the same while he was in office.

The Elections Commission, along with a new Ethics Commission, was created in legislation approved in 2015 by the GOP-controlled legislature and Republican Gov. Scott Walker. The partisan panels replaced Wisconsin’s nationally recognized nonpartisan Government Accountability Board.

Four members on each commission are chosen by Democratic and Republican legislative leaders, and two members on each panel are appointed by the governor, subject to Senate approval. The appointees serve five-year terms.

Knudson’s Wisconsin Liberty Fund PAC has raised about $20,800 and spent about $60 since it was created.