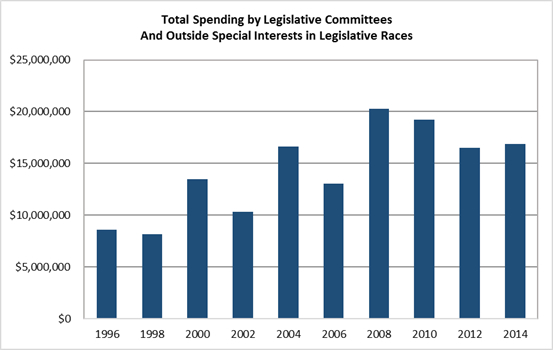 Legislative candidates spent $12.1 million and outside special interest groups spent an estimated $4.8 million. The 23 outside groups involved in the legislative races are backed by wealthy manufacturing, labor, business, environmental, real estate, agriculture, and conservative and liberal ideological interests, among others.

Outside group spending in the legislative races was led by the Wisconsin Manufacturers & Commerce (WMC), the state’s largest business organization, which spent at an estimated $1.5 million; the left-leaning Greater Wisconsin Committee (GWC), which spent an estimated $900,000; the American Federation for Children, a Washington, D.C.-based group that supports school voucher programs in Wisconsin and around the country, which spent $850,857; and the First Amendment Alliance Educational Fund, a Virginia-based group that supports Republicans for state and federal offices around the country, which spent $335,710. These four groups spent much or all of their money on negative television ads, mailings and other electioneering activities in the targeted 17th and 19th District Senate races, which drove those contests to be the two most expensive legislative races in 2014.

The 17th Senate race was the most expensive legislative race in 2014 and cost an estimated $2.9 million. Outside special interests spent nearly $2.2 million and the candidates spent at least $693,448, led by Republican Howard Marklein, who doled out $487,984 to defeat Democrat Pat Bomhack and replace retiring GOP Sen. Dale Schultz of Richland Center.

WMC spent an estimated $1.1 million on television ads that criticized Bomhack for supporting the federal Affordable Care Act and policies that would increase taxes. Greater Wisconsin spent an estimated $600,000 on a television ad that accused Marklein of slashing $800 million in state funding for public schools in order to pay for tax breaks for wealthy special interests. American Federation for Children doled out $240,405 on radio, mailings and online advertising to support Marklein.

The second most expensive legislative race was for another open seat in the 19th Senate District where outside special interests and the candidates spent an estimated $2.1 million. Outside special interest groups spent $1.4 million and the candidates spent $755,003, led by Republican Roger Roth, who spent $410,948, and won. Roth faced Democrat Penny Bernard Schaber for the seat formerly held by GOP Sen. Mike Ellis of Neenah, who retired.

In the 19th Senate race, the First Amendment Alliance and Greater Wisconsin spent about $300,000 each on television ads. First Amendment Alliance bought television ads that attacked Schaber, and Greater Wisconsin sponsored a television ad that accused Roth, a former Assembly representative, of bowing to special interests by supporting tax breaks for the wealthy and opposing equal pay for women. WMC spent about $220,000 on two television ads that accused Schaber, who was an Assembly representative, of supporting higher taxes and government spending.

For more details about the activities and spending by these outside electioneering groups, check out the Hijacking Campaign 2014 feature on the Democracy Campaign website.

Four caucus fundraising committees used by Senate and Assembly Republican and Democratic leaders to milk special interests for money to spend at election time spent nearly $2 million, which was a record in a regular, general election year (see Table 2 below). The spending was led by the Republican Assembly Campaign Committee, which spent $821,159 to aid Republican incumbents and challengers in Assembly races, and help increase the GOP Assembly majority from 60-39 to 63-36.

Table 2
Fundraising and Spending by Legislative Campaign Committees in 2014

Twenty-seven Senate and Assembly candidates spent more than $100,000 on their campaigns in 2014. The group was led by three of the four Democratic and Republican final ballot candidates in the targeted 17 th and 19 th Senate races. The top-spending legislative candidates (see Table 3 below) were Marklein at $487,984; Roth at $410,948; and Schaber at $344,055.