Share:
WDC Executive Director Mike McCabe's remarks at the kick off event for the Citizen Vigil for the Greater Good. Citizen Vigil Kicks Off at the Capitol

About 50 people gathered at the Capitol for the opening of the Citizen Vigil for the Greater Good. Wisconsin Democracy Campaign director Mike McCabe made the following remarks: 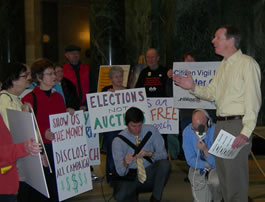 Gather around. It is not easy for the voices of ordinary citizens to be heard in this building. Those who have been elected to represent us here have taken to heart the judicial decree that money is speech. Money throws its voice in this place every day. What we have today is not a legislature, and surely not a citizen’s legislature. It is a parliament of ventriloquist dummies. It’s the darndest thing . . . they can be drinking a glass of water or a cup of coffee or eating a sandwich and still appear to be speaking. Money throws its voice at the Capitol every day.

The Democracy Campaign issued a report earlier this week showing that a record $37.4 million was spent electing a new governor. The truly astonishing thing is that all that money was supplied by less than 1% of Wisconsin’s population. Even before that special interest goodie bag known as the state budget bill has been introduced, the big donors who bankrolled the 2010 governor’s race have been paid back in full and then some, with nearly $70 million in corporate tax breaks already approved and all manner of other favors for the rich and powerful being done almost daily.

Money throws its voice in this building every day. This is why we are today beginning a citizen vigil at the Capitol. This action has two aims. First, to keep a constant spotlight on special interest influence over lawmaking in our state. If the elected representatives of the people of Wisconsin are going to cater to the wishes of the less than 1% that paid for them to be here, day after day, some of the other 99% of us are going to call them on it day in and day out. The second aim is to keep alive the idea that government should work for the greater good.

The legislature is scheduled to be in session today. Go over to the Assembly and Senate and you’ll see the legislative chambers are empty at the moment. Regular folks work 9 to 5, or really more like 8 to 6, five days a week, 50 or 51 weeks a year. Doesn't work that way here. They are scheduled to be in session on just over 20% of the days this year. And on many of those days they won't convene.

But rumors are flying in this building that there will be a major announcement made tomorrow about legislation to limit or take away altogether the rights of people to organize and collectively bargain with their employer. We’re hearing legislators are being told to cancel any plans and be in town next week to act on the legislation. We’re hearing they plan to introduce the legislation at the beginning of the week and have it passed and sent to the governor by week’s end. All to be done during a week when they are not scheduled to meet.

Were they planning to let the public in on their little secret? Have public hearings crossed their minds?

Money throws its voice in this building every day. It’s the voice of less than 1% of the people who buy elections and own our government. This is why this citizen vigil is needed. If the other 99% of us are to have a voice here at the Capitol, we are going to have to fight for it.

It is not easy for the voices of ordinary citizens to be heard in this place. We can't throw our voices the way money can. But we can carry banners and signs. And we have cell phones. We’ll spread our word on Twitter and Facebook. We’ll tweet. We’ll text. We’ll blog. And we’ll do it day after day after day. We’ll do it to keep alive the idea that government should work for the greater good.