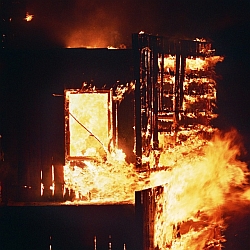 The construction industry opposes requiring new homes to be built with more devices to prevent electrical fires and shocks. But state firefighters have told Gov. Scott Walker’s administration that the proposed state requirement would save lives and prevent serious injuries.

The proposal to expand the use of arc-fault and ground-fault circuit interrupters in new homes was approved 9-1 last year by an advisory committee to the Department of Safety and Professional Services. The department initially rejected the committee’s recommendation, but announced last week that the package of administrative rule changes to the electrical code, which would need Walker’s approval, were not yet final.

The Wisconsin Builders Association says it opposes expanding the number of the electrical devices required in newly built houses because it would add $400 to $600 to the cost of an average home.

Wisconsin Fire Incident Reporting System data shows an estimated 1,070 electrical fires in the state between 2010 and 2014 could have been prevented if arc-fault circuit interrupters had been present, according to Cumberland Fire Chief Barry Kuenkel, secretary-treasurer of the Wisconsin State Firefighters Association.

The construction industry is among the top special interest contributors in the state, doling out $7.8 million to candidates for statewide office and the legislature between January 2011 and December 2016. Walker accepted nearly $5 million in contributions from the industry during that time.

On Tuesday, GOP Rep. Adam Jarchow, of Balsam Lake, urged the governor to reject the requirement, calling it “an unnecessary regulation on hardworking taxpayers.”

Jarchow, an attorney who also identified himself as a volunteer firefighter, received about $21,600 in campaign contributions from the construction industry between January 2014, the year he was first elected, and December 2016. Jarchow’s construction industry contributions were second only to the $21,850 he accepted during that time from GOP candidates and state and local Republican Party committees.

In a related matter, last week the department abruptly abandoned plans to stop requiring that fire sprinklers be installed in apartment buildings with three to 20 units after the Milwaukee Journal Sentinel reported on the proposal.