With apologies to Simon and Garfunkel, there must be 50 ways to rig an election.

I hope my meaning won't be lost or misconstrued. But I'll repeat myself at the risk of being crude. There must be 50 ways.

Slip us cash and we've got your back, Jack.

Just listen to me.

Hop on the Americans for Prosperity bus, Gus.

No need to discuss much.

And you'll be home free.

Republicans came into the 2012 state legislative elections holding the most seats in the Legislature, and money flowed to the party in power. Incumbent lawmakers raised and spent twice as much as challengers did. Winning candidates spent 85% more than their opponents. Special interest groups favoring the Republicans doubled the spending of Democratic groups. Overall, candidates and interest groups on the Republican side spent over $3 million more than the Democrats.

Total spending in last fall's legislative races was down somewhat from 2010 levels. One obvious reason is that big donors and interest groups that would normally have been funneling money to Assembly and Senate hopefuls in late 2011 and the first half of 2012 were instead busy bankrolling recall elections. They dumped more than $93 million into the 2012 recalls.

A less obvious reason that "only" $16.5 million was raised and spent in 2012 legislative contests is redistricting. The new legislative district maps left us with precious few competitive seats. Majority Republicans who controlled the redistricting process packed Democratic voters into a small number of districts, concentrating Democratic voting power in a few areas and diluting it across the rest of the state. Making ultra-Democratic districts here and there allowed them to make many more safe Republican seats elsewhere. Almost no seats are truly up for grabs. The parties and their campaign donors had little reason to duke it out in the vast majority of districts because the outcome of those elections was a foregone conclusion. 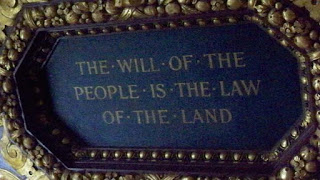 Election results in 2012 congressional and state legislative races in Wisconsin provided a vivid illustration of the power of partisan gerrymandering in redistricting. Collectively, Democratic candidates for U.S. House, state Assembly and state Senate got the most votes across the state. But Republicans won the most seats in all three legislative bodies.

To this day, the words of Wisconsin political icon Fighting Bob La Follette are inscribed on the ceiling of the governor's conference room in the State Capitol: "The will of the people is the law of the land."

With a money game that gives those in power grotesque financial advantages over those who seek to challenge them, and with one-party districts from one end of the state to the other, the act of expressing popular will at the ballot box is mocked and thwarted because voters have little practical ability to impose their will on the legislative branch of government.