This Citizens for Impartial Justice which supported incumbent Supreme Court Justice David Prosser should not be confused with another political action committee of the same name that supported his opponent, Assistant Attorney General JoAnne Kloppenburg in the April 5, 2011 race for the high court.

The treasurer of this committee is Paul Bucher, a former Waukesha County District Attorney and failed Republican attorney general candidate in 2006. Financial backers of the committee include Carol Taylor, Ara Cherchian and Stephen Landolt, all long-time contributors to Republican candidates.

The final report filed by this organization shows it spent money on yard signs, radio ads and automated phone calls.

According to reports to WDC, one call claimed "liberals" were spending "millions" to "steal the Supreme Court" election and that Kloppenburg would stand in the way of efforts to return government to "the side of the people." The call also noted Kloppenburg had been passed over for judicial appointments in the past.

Another call said Kloppenburg had no previous judicial experience unlike Prosser who also had never been a judge until he was appointed to the Supreme Court in 1998 by former GOP Governor Tommy Thompson.

Planned Parenthood Advocates of Wisconsin first registered as a corporation to make independent expenditures in the fall 2010 elections.

Planned Parenthood only indicated its intent to support Supreme Court challenger JoAnne Kloppenburg's candidacy on April 4, one day before the 2011 election.

Citizens for the Republic

This is a political action committee formed in the late 1970s by Ronald Reagan to build conservative support for his second bid for the presidency in 1980. Today, the group advocates limited government and strong foreign policy, among other things, in an effort to revitalize the Republican Party in much the same way it claims Reagan did, according to its website.

The Virginia-based group is led by several political consultants and others with conservative credentials and Reagan administration officials, including former U.S. Attorney General Ed Meese.

Citizens for the Republic sponsored prerecorded telephone calls shortly before the state’s April 5 spring elections that urged listeners to support incumbent Justice David Prosser in his reelection bid against Assistant Attorney General JoAnne Kloppenburg for a 10-year seat on the Wisconsin Supreme Court.

The automated calls featured Meese who told listeners Prosser was a “Reagan Republican.”

The Greater Wisconsin Committee first registered as a corporation in order to make independent expenditures in the 2010 fall election.

Before filing an oath of independent disbursements with the Government Accountability Board and making independent expenditures, the Greater Wisconsin Committee had already run issue ads in opposition to incumbent Supreme Court Justice David Prosser.

This is a new Wisconsin political action committee formed by Vermont-based Democracy for America which was itself founded in 2004 by former Democratic National Committee Chairman Howard Dean to support Democratic candidates.

DFA – Wisconsin originally registered with the state’s Government Accountability Board to make independent expenditures against eight GOP state senators and in support of eight Democratic state senators as part of recall efforts prompted by the passage of Republican Governor Scott Walker’s bill to limit collective bargaining rights for state workers.

On April 1, DFA - Wisconsin amended its registration to include support for JoAnne Kloppenburg's Supreme Court candidacy and opposition to the incumbent, Justice David Prosser. 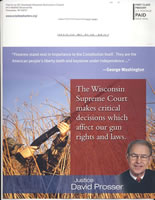 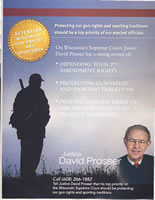 This group bills itself as the largest hunting advocacy and education organization in the country with an emphasis on protecting America’s so-called “freedom to hunt.” Safari Club also lobbies state officials on hunting and wildlife-related issues.

The mailings said Prosser supported the right to bear arms and allowing people to have concealed weapons in their home or business.

This group, which appears to represent Brown County lawyers, registered as a corporation to make independent expenditures on behalf of Wisconsin Supreme Court Justice David Prosser in his April 5 reelection bid against challenger JoAnne Kloppenburg, an assistant state attorney general.

The organization lists its address as De Pere and its treasurer as Ross Townsend, a Green Bay attorney.

This Kenosha-based group registered as a corporation to make independent expenditures to support Wisconsin Supreme Court candidate JoAnne Kloppenburg in her effort to defeat incumbent Justice David Prosser in the April 5 spring elections.

This group has was first created in 2008 to support Democratic candidates.

The group has conducted door-to-door literature drops, sponsored mailings and provided organizing assistance to other progressive organizations to help dozens of Democratic candidates in races for governor, Supreme Court, state school superintendent and the legislature.

Advancing Wisconsin only filed an oath of independent disbursements in support of JoAnne Kloppenburg for the Supreme Court on March 3, but it had circulated an "issue ad" flyer in her support before then.

This phony issue ad group formed in 2009 after a national bus tour - organized by the California-based Our Country Deserves Better PAC - that rallied Tea Party members around the country. 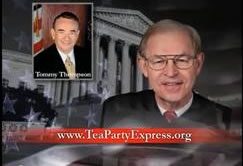 The Tea Party Express sponsored a television ad less than a week before the April 5 spring election that claimed Wisconsin Supreme Court candidate JoAnne Kloppenburg was backed by union bosses and was turned down for four open state and federal judgeships between 2000 and 2009 because “she just isn’t qualified.”

Page 1 of 5
Join the democracy Campaign